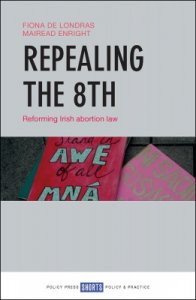 Irish law currently permits abortion only where the life of the pregnant woman is at risk. Since 1983, the 8th Amendment to the Constitution has recognised the “unborn” as having a right to life equal to that of the “mother”. Consequently, most people in Ireland who wish to bring their pregnancies to an end either import the abortion pill illegally, travel abroad to access abortion, or continue with the pregnancy against their will.

Now, however, there are signs of change. A constitutional referendum will be held in 2018, after which it will be possible to reimagine, redesign, and reform the law on abortion. Written by experts in the field, this book draws on experience from other countries, as well as experiences of maternal medical care in Ireland, to call for a feminist, woman-centered, and rights-based radical new approach to abortion law in Ireland.

Directly challenging grounds-based abortion law, this accessible guide brings together feminist analysis, comparative research, human rights law, and political awareness to propose a new constitutional and legislative settlement on reproductive autonomy in Ireland. It offers practical proposals for policymakers and advocates, including model legislation, making it an essential campaigning tool leading up to the referendum.